Sarah Halley is an organizational development consultant and experiential educator with 18 years experience, working primarily on team building, leadership development, inclusive strategic planning, and diversity/cultural competence. She co-facilitates a series of workshops for White People Confronting Racism, based out of Training for Change, a grass roots, nonprofit training center in Philadelphia dedicated to global social change. Sarah is also the founder and co-director of Playback for Change, a multiracial improvisational theatre troupe that uses playback theatre as a vehicle for social change, and is an international leader and trainer in the international Playback Theatre movement. Sarah also has a background in engineering and spent 8 years as a classroom teacher in the Philadelphia area. 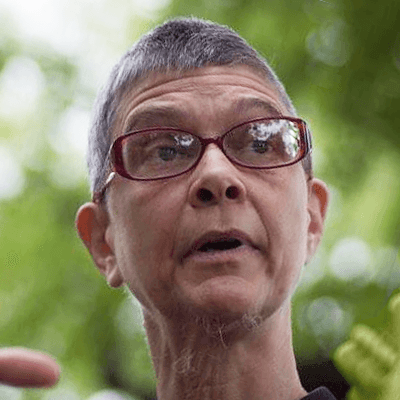 Erika Thorne has been a progressive activist, writer, facilitator and cultural worker since 1974. She focuses on cross-race coalition-building, anti-racism work with other whites, and diversity work. Erika has worked with environmental and media justice groups, undocumented immigrants, Hmong organizations, domestic violence activists, housing projects residents, the national education department of a large US union, and a full range of non-profits, organizers and rabble-rousers. In 2012, she collaborated with local training organizations to co-facilitate four workshops for 98 Burmese nonviolent activists in northern Thailand. She trains multi-racial groups of trainers in the UK through Campaign Bootcamp, and in northern Europe with Vredesactie.  Erika is on the core organizing team of SURJ-MN (a white co-conspirator group.) She also loves to facilitate training of trainers, hate-crimes response, conflict waging, ethical grassroots fundraising, and meetings – especially real sticky ones! Erika was the Managing Director of MN Friends for a Nonviolent World for nearly three years, and coordinated the Alternatives to Violence Project-MN, offering intensive workshops in prisons and jails, for five years.  As a former dancer for social change, she brings joyful physicality to her facilitation. Mike has been a racial justice activist since 1991.  The unrest in Crown Heights that August, followed by a course in Racial Identity and Mental Health taught by Robert Carter, Ph.D. set him on his journey.  Mike has been involved with the National People’s Democratic Uhuru Movement, People’s Institute for Survival and Beyond (PISAB) and in several faith based initiatives.  As a psychologist, he brings a justice lens to his therapy practice and he is involved with training therapists in multicultural competence.  Further, he consults with organizations that are working toward realizing these values. Mike was a participant in the White People Confronting Racism workshop in 2011 and returned as a facilitator in 2016.  “Ron Chisom, founder of PISAB, once told me that if you bring 2 White people together to talk about undoing racism you are doing something important. I’m honored to be part of a team that is engaging hundreds of White people in this struggle” Cara is a queer femme weirdo, a community organizer, and a harm reduction practitioner who dreams of a world without prisons and police. She is a core organizer with the Philadelphia Community Bail Fund, and has been organizing to shut down jails and to end cash bail for 5+ years in Philly. She has worked in direct-service in reentry, harm reduction, HIV/AIDS and housing justice. She is grateful for all her mentors and for Black feminist movement leaders, who pushed her to grow a radical imagination and to believe that another world is possible and is on her way. Cara has found the work to unlearn the trauma of white supremacy to be deeply transformative and healing spiritual work. She brings a goofy sense of humor, a love of music and singing, and a heart-centered presence to facilitation. When not facilitating or organizing, she can be found caring for her plants and her cat-child Dracula.